RustRidge Bo was the last born foal of RustRidge Sippling, our 22 year old broodmare. His brothers RustRidge Range, RustRidge Flavor, RustRidge Brix, RustRidge Zin and Stacy's Ridge were all winners much sooner in their careers!

Bo had numerous setbacks. When he was born his back hoof was tucked under and he dragged it. We had to wrap his ankle and hoof so that they would stay upright. Once he got over that problem, we discovered that his front leg was crooked and our veterinarian said it would not straighten out properly without surgery.

So at the tender age of seven weeks old, Jim and I got Bo and his mother into our old horse trailer and hauled them up to Davis for this surgery. It was quite a precarious adventure. His mother was always a difficult horse to handle; but, somehow, we were able to get them from the horse trailer to the vet hospital elevator to the examination room without either one freaking out. The surgery was done with Sippling standing near by. There would be no way to separate such a young foal from his mother. After that surgery, Bo was just fine and grew up at the ranch.

Bo went into training and ran once as a 3 year old in 2005 at Hollywood Park. Then he was laid off for a year so he could grow and mature and came back in June 2006. While showing some promise his best effort was two 4th places. Unfortunately, he developed heat in his tendons in August of that year and was out of competition for another 18 months.

Bo started running again in February 2008 and raced well on numerous occasions coming in second, third or fourth most of the time. In his seventeenth try he lost by a head, and he showed more determination in that race than any of the previous ones. So, when Jim and I drove to Sacramento on August 20th to see the race, we were hopeful. It was a sweltering 95 degrees and the horses all had to be washed down several times before the race. But Bo was cool and confident and he ran a perfect race. He did it with a new jockey, Kyle Kaenel, a new track, Sacramento Fairgrounds, a new distance, 1 & 1/6 miles and on his eigthteenth start! 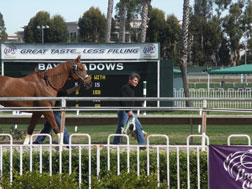 RustRidge Bo and Jim at the Track 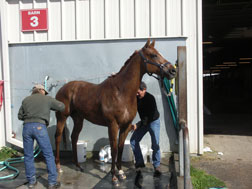